A home-grown sport developed by Cam Arnason to fill the spare time available while going out hunting / fishing one year. It has really caught on and tournaments are now held throughout the Interlake. The equipment needed is very simple: a post, an empty bottle, and a Frisbee. The bottle is balanced on the top of the post and the idea of the game is to knock it off with the Frisbee.

The skills displayed in attacking and defending are quite remarkable and make this an excellent spectator sport. 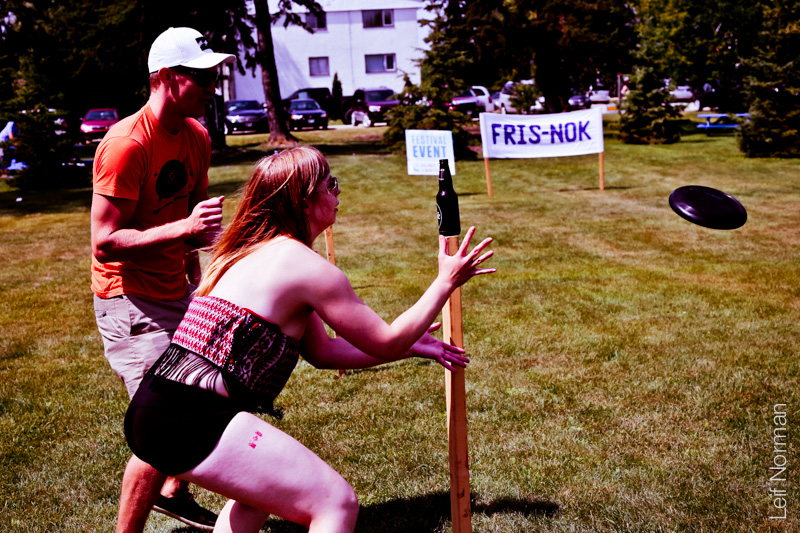 Players: Fris-Nok may be played either singles or doubles. Doubles is the popular form. In either case, the court and rules are identical.

Court: Fris-Nok posts are placed in zones 30 feet (9.15M) apart. There must be room for vigorous activity in the area surrounding the zones. A Fris-Nok bottle is placed on each post. In windy conditions it may be necessary to add some water or sand to the bottles. The distance between the two posts may be reduced to 20 feet for children or inexperienced players.

Object: All games are to five points. A point is scored when:

Play: A coin is tossed to begin play. The team who wins the toss has the choice of end of court or first throw. Each team takes up its position behind the post in the zone it is to defend; players alternate throws A1, B1, A2, B2.

Penalties: When throwing (serving the disc) a player must not step over the foul line. If he/she does the throw is dead. If the Fris-Nok disc strikes the ground before the foul line, the player next to throw on the receiving team is awarded an extra throw. He/she throws twice instead of once. If the receiving team fails to catch the Fris-Nok disc before it touches the ground, they must return the disc to the thrower, who is awarded an extra throw.

The judge's decision is final.