The Maid of the Mountain

In 1924, the tradition of selecting a woman to be the Fjallkona began. The Fjallkona (Maid of the Mountain) is Iceland, and the Icelanders are her children. Mrs. Sigrun Lindal became the first Fjallkona of Islendingadagurinn. At the festival, the selected woman sits on her elevated throne, clad in the beautiful and dignified formal Icelandic costume of a white gown, green robe with ermine, golden belt, high-crowned headdress and white veil falling over the shoulders to the waist. Two maids of honour, formerly clad in plain Icelandic costume with tasseled skullcaps, are now dressed in white. In former years, these maids of honour were known as Miss Canada and Miss America.

Anna married Elert Stevens and they have lived all of their life in Gimli, Manitoba. Anna has a very large family which includes five children; Judy, Heather, Sharon, Deanne and Glen, and dozens of grand-children and great-grand children.Following in the footsteps of her mother, Anna has been involved with the Lutheran Church for most of her life, and was always willing to take on a big role in church events. She directed the Icelandic Children’s Choir and knows many of the old favourites by heart. She has sung in the Lutheran Church Choir for many years and frequently sings with the Happy Hour group at Betel. 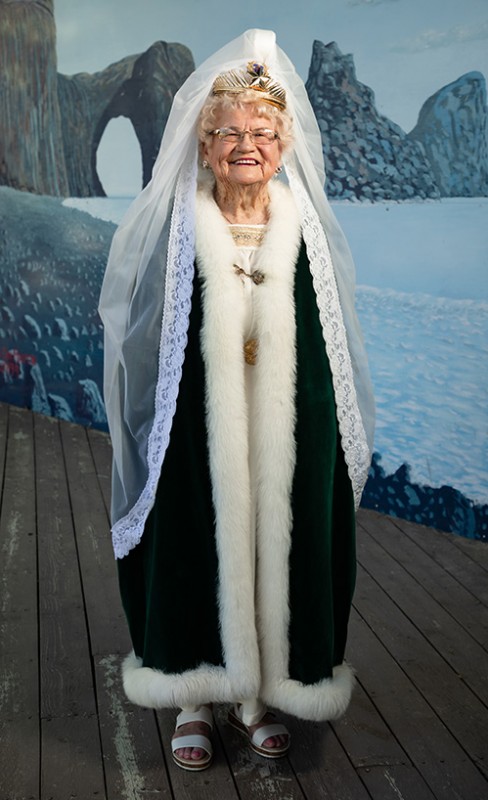 Anna is a Life Member of the Gimli Icelandic Canadian Society and has been involved with the chapter since she was 16. As a teenager she would write out the meeting minutes in Icelandic for her father, Villi, who at that time was the Secretary/Treasurer of the chapter.

Over the years Anna has been an active participant of the Icelandic National League of North American (INL) and continues to attend INL events to this day. In 2018, at the age of 95 years old, Anna and her good friend, Dilla Narfason, drove into Winnipeg to attend the INL banquet and had such a good time they didn’t make it back to Gimli until midnight!

Anna is an avid knitter, and has knit hundreds of traditional Icelandic sweaters, mitts, hats and more. Some years ago she and her sister-in-law, Diddy Arnason, were written up in Canadian Living magazine with pictures and directions on how to knit Icelandic sweaters. Anna has lent many of her pieces to the Icelandic Festival over the years for fashion shows, and had members of her family model them.

She loves to bake and many a dainty has gone out to functions and sales. Anna also been very involved with both the Gimli Curling and Skating Clubs.

Anna regularly attends the Wednesday afternoon Icelandic talk sessions at the Waterfront Centre in Gimli, and Gimli Icelandic Club meetings. These ‘chats’ are helping keep the Icelandic language alive in our community.

In her life Anna has made countless contributions to the community and encouraged her family, friends and others to celebrate their Icelandic culture and heritage. Her positivity and enthusiasm for life has endeared her to everyone that knows her.

She has never missed an Islendingadagurinn, and we are so honored to have her as the Fjallkona of the 132nd Icelandic Festival.

With contributions from Dilla Narfason and Janice Arnason

Creative Memories Exhibit - Pictures and stories of past Fjallkonur.

Open by appointment only for fall/winter